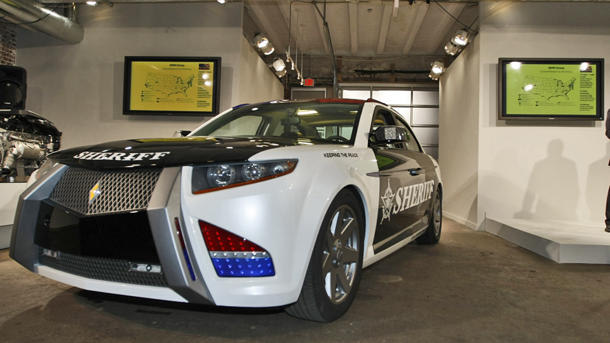 Five years ago, an Indiana firm named Carbon Motors began touting a plan to manufacture a purpose-built police car with every 21st-century technology available. Called the E-7, Carbon Motors execs crossed the country in a bid to win investors and a $310 million federal loan, signing deals to buy up to 240,000 BMW turbodiesel engines and employ up to 1,500 people.

Today, Carbon Motors exists only as a bankruptcy court case, and last week a judge approved a plan to auction its only asset of value — the sole E-7 prototype car the company managed to build before it collapsed.

At a time when the Ford Crown Victoria was still the dominate police cruiser, the E-7 seemed like a prop from RoboCop brought into reality. Carbon Motors pledged the E-7 would offer law enforcement every protection known, from armored doors to rear-hinged doors and back seats designed for handcuffed prisoners. The BMW diesel was supposed to provide superior fuel economy, and Carbon vowed an E-7 would last twice as long in service as a normal cop car — up to 200,000 miles and beyond — which would offset a higher cost that Carbon never specified. It even managed to get the E-7 into a version of the “Need for Speed” video game.

Despite all its sales pitches, Carbon executives could never close with the one investor who mattered most: the U.S. government. The $310 million federal loan it applied for came from the same $25 billion program that gave money to Tesla, Fisker, Ford and Nissan — and which, after a brief flurry of approvals in 2009, has all but shut down. In 2012, Carbon announced the U.S. Department of Energy had finally rejected its application after 30 months of talks. Carbon executives accused the Obama administration of shutting off credit after the failure of Solyndra and other loan companies; Energy officials denied it, saying Carbon’s business plan simply wasn’t strong enough.

Earlier this year, Carbon filed for bankruptcy, listing $21.7 million in liabilities to investors and ex-employees; it had also spent $7 million in local government grants without anything to show for it. Last week’s order allows an Indiana auctioneer to market the E-7, stored in California at the moment, saying the car would have “significant interest” among collectors. Carbon’s bankruptcy attorney told The Indianapolis Star that Jay Leno was interested — proving that while it never built more than one car, Carbon will keep throwing out sales pitches to the end.